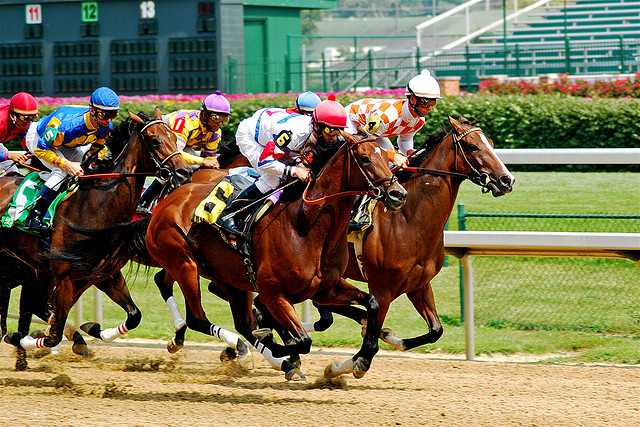 Will You Be Attending the 140th Kentucky Derby?

With the Kentucky Derby right around the corner, many racing enthusiasts are planning their Derby parties, and some may even be planning a trip to Kentucky. If you’ve never been to the Kentucky Derby, you should make it a point to try to get there at least once in your life. The Derby is a one-of-a-kind event that brings the thrill of horse sports into most American households, if even just for a day.

Held annually on the first Saturday in May, the Kentucky Derby is a race over one and a quarter miles. Held at Churchill Downs in Louisville, Kentucky, the Derby pits the top three-year-old Thoroughbred racehorses in the world against each other.

The Derby is the first race of the Triple Crown – the Preakness Stakes and the Belmont Stakes make up the following two races. If a single horse wins all three races, he has won the Triple Crown – an incredibly difficult feat. The outcome of the Kentucky Derby, known as “The Run for the Roses” and as “The Greatest Two Minutes in Sports,” determines the one horse who could potentially go on to win the Triple Crown each year.

History of the Derby

The Kentucky Derby was first run in 1875. Modeled after the horse races of France and England, the Derby was created by Colonel Meriwether Lewis Clark, Junior. The first field consisted of 15 horses, and a colt named Aristides went on to become the first Kentucky Derby winner.

The Derby became a tradition, and many horses entered in the Derby were also raced in the Preakness Stakes and the Belmont Stakes. All three races were first won successfully by Sir Barton in 1919, followed next by Gallant Fox in 1930. It was at this point that the idea of the Triple Crown was coined, and the Kentucky Derby, which had been run in the middle of May until that point, was rescheduled to be held on the first Saturday of May, creating a new schedule for the Triple Crown.

If You Go – Traditions

If you attend a Derby, you need to drink a mint julep while you’re there. The cool drink contains bourbon, mint, and sugar, and with it you typically get a souvenir Kentucky Derby glass.

If you feel like dressing up, the Derby is the place to do just that. Fashion is highly regarded on Derby Day; both men and women show up in their best clothes. The Kentucky Derby hat has become a tradition for women. Hats can range from the fashionable to the downright outrageous – you decide what type of hat you want to wear.

If you don’t feel like dressing up, then the infield may be the place to be. The track infield is opened up to accommodate the increased attendance for the Derby, and admission to the infield is offered at a reduced price. While you might not be able to see much of the race from that vantage point, infield parties are sure to keep you entertained.

As the strains of “My Old Kentucky Home” sound out over Churchill Downs, there is no better place to be than in the stands or infield, watching the field of the best Thoroughbreds proceed down towards the starting gate.